Just when you thought food couldn’t get any more super… there’s a new super food that promises to do everything but wash the dirty dishes in your sink!  Thank God it’s here… just in time for back to school! I need all the energy I can get!

Apparently it’s all in the leaves.  The leaves of the morninga trees are tiny and packed with a punch!

Dating back a zillion… yes, our researchers go back that far to get you accurate information!  From Ancient Egyptians to Roman Gods, Tribal Africans and the Ancient Chinese, they all ate the stuff, smoked the stuff &  drank the stuff as a tea.   Now, thanks to modern achievements in super food science, moringa is back baby!

How to use it:

If you can find it fresh… (you’ll most likely need to live in California or the Honduras as that’s where it’s primarily being grown right now) throw some leaves into a salad.  It has a lemon-peppery taste.  Kinda like a tangy arugula or spinach.  It’s starting to appear in more health food stores & you can order it online.  Most will sell it dried or in the powder form… but I’m thinking a once a day pill will kinda do the trick. 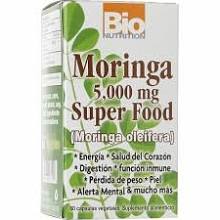